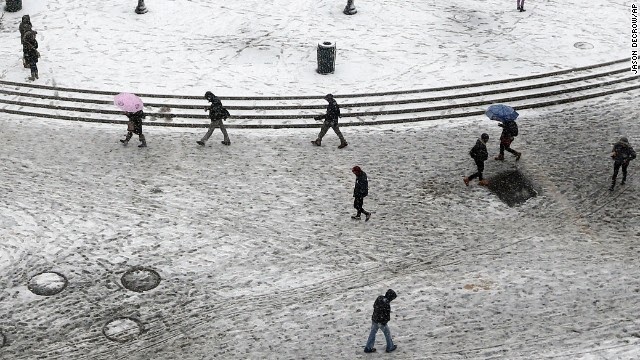 The first assault was by Union Square. A blond skinny guy who works at the closest Best Buy, on 14th Street, was smoking a cigarette while talking on the phone. He did not see who punched him, “I am so sorry officer, not to be more helpful, in this modern and bleak conundrum;” but eyewitnesses stated that two men, or better yet, two biped beings wrapped in layers of fabric approached the victim and just hit him hard, both of them, leaving him unconscious on the sidewalk, on the snow.

The second assault was around Union Square also. It involved a plump lady from México, smoking and talking on the phone, also. When she opened her eyes, she whispered, “Would you be so kind, so merciful, nice strangers, not to call the police, please?” But the nice strangers helping her disregarded this unheard of among white people request, and the police was there in 3 minutes.

Then the speculations. Two citizens who only seem to share being smoking while talking on the phone have been assaulted, punches on their faces.

Brooklyn was the place for assaults 5, 6, 7 and 12. Queens was hit too; the Bronx took 7 assaults in a row, all around the Bronx Zoo.

The Police already found out it is the same culprits. Two green and yellow striped scarves have been conspicuous on the videos, constant urban surveillance has to amount to something.

Now you know why striped scarves are frowned upon in this city.
And you should not wear yellow or green
if you have good taste
and you are not blind
and you do not wish
to cheer wildly
while being frisked
by the NYPD.