The shooting of a Best Buy employee 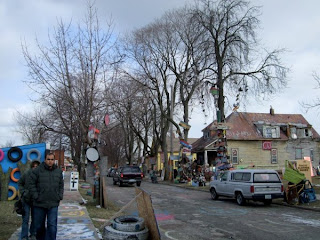 The man who shot a Best Buy employee, who was carrying a free Nintendo Wii, lives in the outskirts of Detroit. Following the Dave Chapelle standards, the neighborhood is clearly a ghetto. Gun shops and liquor stores everywhere.
The man who shot a Best Buy employee did not know that the men at his front door were a filming crew and an actual Best Buy employee, filming a Reality TV commercial to be aired through the Christmas sales season. He thought they were some latino teenagers that now and then take their pitbulls to shit at his porch. He said he heard them talking about weed, maybe pushers. He said he has never played Nintendo Wii, not even Super Mario Bros. He said he has never heard about Luigi either.
We all have seen the Best Buy commercials, Best Buy employees wearing their blue tshirts giving a family the surprise of a lifetime: A Nintendo Wii totally free, some scenes filled with the joy of sharing a family afternoon indoors, playing Golf, with cocoa and marshmallows and a fucking fireplace.
CNN is blaming the producers, who say that a surprise is precisely that, not knowing what is going to happen next.
Newsweek is blaming the Economy, who is hiding and not giving any interviews, of course. Some say that the man who shot a Best Buy employee is a victim of the almost 10% unemployment rage. He was fired a year ago from General Motors and was very angry about the bill for the extension of the benefits for the unemployed, stopped at the senate by the republicans.
The New Yorker is blaming the lack of talent that has taken over Television. There are no writers anymore. Nothing is scripted. Everything seems to be left in the capricious hands of randomness. Reality TV, The New Yorker states, is nothing but untalented people filming untalented people doing banal things. Very often there are fights, and now the death of a minimum wage employee.
I googled the news, and nowhere says anything about the man who shot a Best Buy employee's personal life. He lives in a house by himself. Houses are for families, obviously a woman, and maybe children, left him.

Lonely,
broke,
and a gun,
anybody can shoot anybody,
even Santa Claus.
# entrada de blogworkorange : 11:54 p. m.